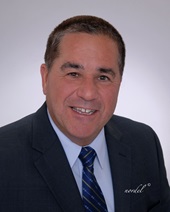 Joe McGonagle has served as Everett's State Representative since he was elected in 2014, but his roots in Everett and his desire to give back to the community he has always called home goes back generations. Joe was raised in a family that gave much to community and he comes from a long line of public service. His father was a Lt. Col. in the U.S. Army and served on the Everett Common Council and his grandfather was a member of the Everett School Committee. The family's sense of obligation and commitment to public service indeed influenced his desire to give back and serve.

As an Everett City Councilor and Alderman, Joe represented a wide range of issues that were important to Everett families and businesses. As a small business owner, he understands the time, effort, and expense of navigating the pathways of local government. Joe was twice elected by his peers to serve as President of the Board of Alderman, a testament to his ability to lead responsible and transparent debate and voting on issues that affected the daily lives of Everett residents.

As your State Representative, Joe works daily to identify programs and funding sources for the City of Everett in areas including transportation, economic development, education, substance abuse prevention, and homeownership opportunities for residents.

You can also email him at Joseph.McGonagle@mahouse.gov or reach him at the State House at 617-722-2012